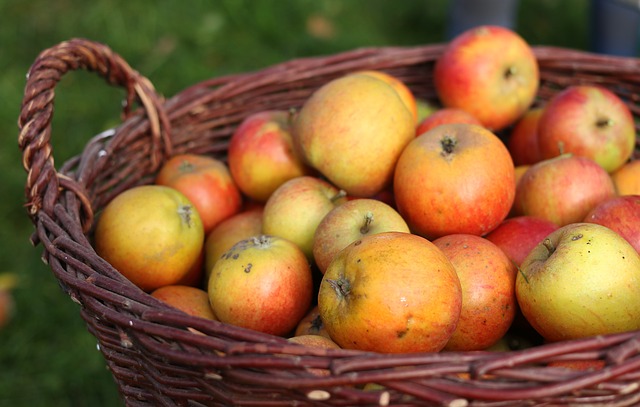 This is the story of how a person of simple means became a legend in his own lifetime.  His name was John Chapman, born in 1774, and he was a strange man.  He prefered to go shoeless, wore non-stylish clothing, and wore a pot on his head.  However, people found him to be a kind and generous man.  His beliefs made him live a simple life, so although he owned land, he prefered to travel around the U.S. states of Pennsylvania, Ohio, Indiana, Illinois and northern West Virginia.  He traveled from farm to farm planting apple seeds in small nurseries.  From there they would eventually be planted in orchards by the farmer.  This is how he got his name Johnny Appleseed.  Since trees grown from seed produce apples that are sour, few people used them for eating or cooking.  Instead, most of the apples he was responsible for planting were used for making apple cider.  This was a free and abundant source of alcohol in frontier America in the early 19th century.  Along with apple seeds, John also brought knowledge of his religion to anyone who would listen.  He lived a mostly nomadic life, sleeping on the floors of the homes of the people who took him in while he was traveling.  He actually converted many Native Americans to his religion, and they had great respect for him, saying he had been touched by the Great Spirit.  John traveled through their lands with no trouble at all.  There are lots of tales about this man.  My favorite is this one:  One day on his travels when he was about to make a camp fire in a hollow log so he could sleep in it and stay warm at the same time, he found a mother bear and her cubs.  Rather than disturb the sleeping bears, he moved his fire to the other end of the large log and slept in the snow.  Lots of these kinds of stories are told about the man.   Johnny Appleseed was a simple man, but people all over the United States remember him.

simple means:  not much money
legend:  a story that is passed down through generations
pot:  the utencil that holds food that you cook
generous:  giving and sharing
beliefs:  things that you believe
prefered:  chose
nurseries:  small buildings where seeds can safely grow into plants
eventually:  after some time
orchard:  rows and rows of fruit trees together
sour:  opposite of sweet
apple cider:  an alcoholic drink made from apples
abundant:  found everywhere
frontier:  newly settled area
religion:  belief in God
nomadic:  having no home, always traveling
took him in:  invited him to stay the night
converted:  changed to a different religion
respect:  belief in someone’s goodness or knowledge
Great Spirit:  God
tales:  short stories
hollow:  only the outside is there
log:  fallen tree
cubs:  baby bears
disturb:  bother, make uncomfortable