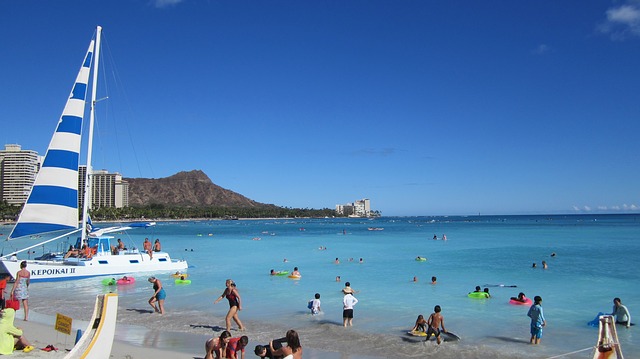 Joan:    When you’re turned around, I can’t tell you apart from your sister.

Jane:    A lot of people say that.  By the way, did you hear what they’re going to give away at Budget Clothes to some lucky customer?

Jane:    A trip for two to Hawaii.  We should go down there and fill out some entry forms for the draw.  I think the limit is 10 entries each, so we’ll have 20 chances to win.  Maybe we’ll get lucky.

Joan:      That’s a great idea.  Then we can try on some new clothes while we’re there.  I feel like shopping.  How did you find out about the free trip?

Jane:    They were handing out flyers yesterday at the supermarket.

Joan:    There’s one thing I can’t figure out.  How can they afford to give away such an expensive trip?  It must cost a pretty penny.

• by the way:  changing the topic, talking about something else
• entry form:  paper you fill out so you can win if they pick it
• draw:  the choosing of the winner
• limit:  maximum, the most
• entries:  entry forms
• flyers:  advertisements on paper
• afford:  have enough money

Fill out and fill in have similar meanings, but fill out is generally used for a whole form while fill in is used for one piece of information.
Example:  Don’t forget to fill in your social insurance number.