Gerunds and infinitives – the easy rule 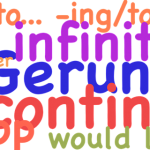 When you put two verbs together in a sentence, most of the time the second verb is either an infinitive (to go) or a gerund (going).  Which verbs are followed by infinitives and which ones are followed by gerunds is often a difficult thing to learn.  Teachers give students lists to memorize and practice, but this is the hard way.  An easier way to learn this grammar is to look at a single verb (stop) and apply its rule to all the other verbs.  Although this rule is only 80%  accurate (true,) it’s better than no rule at all.

Look at this example:
After he had driven for an hour, John stopped to text his girlfriend.

Look at this example:
After he started his car, John stopped texting his girlfriend.

The verbs remember, forget and regret are just like stop.

The verb try is different than the above verbs.  If you are trying to do something difficult or impossible, then the infinitive follows.  However, if you’re trying different things to find a solution to a problem, then the gerund follows.

You should try to finish as soon as possible.  (to finish is difficult to do)
If you’re hot, try opening the window, or taking off your sweater.  (opening and taking off are possible solutions to being hot)

Now let’s look at other verbs to see how they follow this rule.

Example 1:  I want to go to bed early tonight.

First I want, and then I will go.  It’s the same order in the sentence (want / go) and in real time (want / go).  Therefore, the second verb is an infinitive.

She watches first, and then she enjoys the activity of watching.  It’s a different order in the sentence (enjoys / watching) and in real time (watching / enjoys).  Therefore, the second verb is a gerund.

Example 3:  I forgot to brush my hair this morning.

First I forgot, and that’s why I didn’t brush my teeth.  It’s the same order in the sentence (forget / brush) and in real time (forget / brush).  Therefore, the second verb is an infinitive.

Example 4:  He admitted stealing the necklace.

First he stole the necklace, and then he admitted that he had stolen it.  It’s a different order in the sentence (admit / steal) and in real time (steal / admit).  Therefore, the second verb is a gerund.

This a list of the most common verbs that are followed by infinitives.  The ones in [brackets] are exceptions to the rule:

This is a list of the most common verbs that are followed by gerunds.  Again, the ones in [brackets] do NOT follow the rule:

Another thing you should know is if you use a person or a personal pronoun such as “me” after the first verb, an infinitive always follows.

And of course there are a few verbs that are followed by either gerunds or infinitives.  It makes no difference.