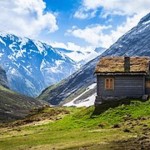 a British-born essayist and novelist of Indian origin.  He is best known for his travel writing.  He is also an essayist who has been writing for Time magazine since 1986.  He also publishes regularly in Harper’s, The New York Review of Books and The New York Times.

First, preview the vocabulary below.  Then click the exercise  below,  read a question and then listening for the answer.  When you hear the answer, pause the video and answer the question.  Then read the next question and do the same thing.