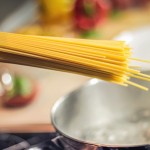 boil:  to heat until air bubbles form
Would you please boil some water for tea?
Don’t boil the soup, but just heat it up.

catch:  to take into your possession
He taught his young son to catch a ball.
You need a net to catch butterflies.

collect:  to gather together in a group
Collect your things and let’s go.
My sister collects old dolls.

float:  to stay on top of the water
They saw a dead tree float by their camp site.
The boy’s coat floated down the river.

fry:  to cook in oil or butter on top of the stove
I’m going to fry the fish, not bake it.
After you cut the potatoes, you fry them in oil.

hurry:  to go fast
If you don’t want to be late, you need to hurry.
They hurried past the candy store so they wouldn’t go in and buy anything.

murder:  to kill (someone)
I saw on the news that a man murdered his wife and then killed himself.
He murdered his brother with a kitchen knife.

rise:  to go upward, to get up
The sun rises in the east.
It’s six thirty and time for everyone to rise.

sip:  drink slowly in little bits
The coffee is too hot, and I have to sip it.
She always sips her drinks to make them last longer.

slap:  to hit with an open hand
She slapped him in the face because she was so angry.
When he won, he slapped his hands together.

steer:  to control the direction of a moving thing
He steered the boat toward the island.
She steered the car to the side of the road and stopped.

trade:  to give something in exchange for another thing
I’ll trade you my sandwich for yours.
The two families traded houses for the holidays.