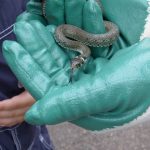 appoint:  to choose (someone) to do a job
The President decided to appoint her as Secretary of State.
The jury appointed the high school teacher as foreperson.

capture:  to catch, take control of
The police captured the terrorist in his hotel room.
That TV show captured my attention.

consider:  to think about
Would you consider starting over again and doing it right this time?
I considered your offer and decided to accept it.

dismiss:  to say (to someone) to leave, to reject
They teachers are going to dismiss the students early on Friday.
The committee dismissed the idea of a fund raising party.

express:  to put into words, state
I want to express my sincere apologies.
He has always had trouble expressing his gratitude.

ignite:  to set on fire, begin to burn
He used matches to ignite the fire.
The lightening ignited the dry trees and a forest fire broke out.

limp:  to walk unevenly because of a bad leg
He tried his best not to limp when he met the president.
After the car accident he always limped.

notify:  to let (someone) know (something), inform
You need to notify the credit card company of your change of address.
After the accident, he knew he had to notify the police.

plead:  to beg, ask for desperately
He pleaded for his life, but they killed him anyway.
The mother went on TV to plead for the return of her child.

recede:  to go or move away, withdraw
At the age of fifty, his hairline started to recede.
It will be another five hours until the tide recedes.

scorch:  to burn slightly
The collar of his white shirt was scorched yellow.
The sun was so hot, it scorched the grass.

slam:  to close with force, hit hard
Although you’re angry, please don’t slam the door when you leave.
The truck slammed into the side of the bus.

thrust:  to push with force
The soldier thrust his knife into the enemy’s chest.
They thrusted their way through the crowd to leave.

withstand: to be strong and survive (against something)
The building was built to withstand a 6.0 earthquake.
Their house withstood the hurricane with little damage.