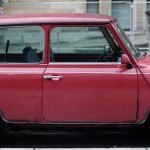 Brian:  I’ve had it with my car.  I think it’s on its last legs.  Yesterday I was pulled over by the police because there was smoke coming out the exhaust.  I need to buy a new car and fast.

Jake:  I think I can help.  I’ve got a friend who owns a twenty-year-old Honda that’s in near mint condition.  He’s a mechanic and has been taking really good care of it for years.  It’s recently come to light that he wants to sell it.

Brian:  That’s good, but I’m of two minds.  I know Hondas are really good cars, but it’s old.  How do I know it won’t break down?

Jake:  I give you my word.  I know this guy, and I know he wouldn’t sell a bad car.  Because of his reputation, you can rest assured that this car will sell fast.  You have a small window of opportunity here, and if I were you, I would make an offer quickly.

Brian: I don’t know.  I’d have to sleep on it.  What’s he selling it for anyway?

exhaust:  the tailpipe of a car
mechanic:  a person who works on cars and other vehicles
break down:  stop working
reputation:  what other people think of him
offer:  what someone is willing to pay

• one has had it: one can’t tolerate something any longer
• on its last legs: almost ready to die
• pull over: stop at the side of the road
• in mint condition: like new, in perfect condition
• come to light: start to be known
• be of two minds: think that both choices are good
• give (someone) one’s word: promise
• rest assured: know that (something) is true
• a window of opportunity: a limited time for action
• sleep on it: make a decision tomorrow
• or so: or about that, approximately
• a fair shake: a deal that’s fair for both people

The opposite of give someone one’s word is break one’s word.
Example:  I believed he would do it, but he broke his word.