Possibility: the modals may, might, could, must be & have to be 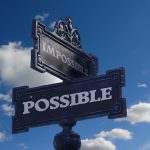 There is really no difference between the modals may, might and could when you’re expressing possibility.  In the following examples, you can substitute any of these three modals.  The verb that follows these modals is in the simple form.

In the negative, may not means that it’s possible that something is not true.

In the negative, might not means that it’s possible that something is not true.

Examples:
She’s not here yet.  She could be stuck in traffic.
This blog could make you famous.
This could take a while, so come back tomorrow.

Must be and have to be are used for a strong possibility.  They are used when making a strong guess based on evidence.

In the negative, must not is used for a negative guess based on evidence.  It can be used with verbs other than be.

Examples:
He has to be crazy to make the same mistake again.
They have to be very thirsty after their long walk in the sun.
I have to be out of my mind to listen to you again.

In the negative, do/does not have to is no longer about a guess based on evidence.  It is about not being necessary.