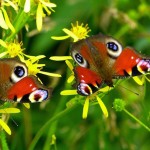 There’s no easy way to know which preposition follows a noun.  The best way to learn this grammar is to learn the noun and preposition together.  If there’s a verb after the preposition, it must of course be in the gerund form.  Here is a list of the most common noun + preposition combinations:

attention to:  His attention to detail is excellent.
cause of:  What is the cause of all this pollution?
component of:  Liquid hydrogen is one component of rocket fuel.
contribution to:  The scientist made many important contributions to his field.
cure for:  There’s no cure for the common cold.
decrease in:  There has been a decrease in crime over the last decade.
demand for:  There’s not much demand for paper bags anymore.
difficulty with:  She’s been having difficulty with her oldest daughter lately.
effect of (something) on (something / someone):  The effect of pollution on the children is severe.
example of:  Give me an example of the unfairness that you’ve experienced.
exception to:  The only exception to this rule is when you’re sick.
excuse for:  There’s no excuse for being late.
experience with: I’ve had no experience with this type of problem.
expert on [or in]:  He’s an expert on European history.
form of:  Watching TV is a form of homework in ESL classes.
group of:  A group of students is meeting after lunch to discuss the final exam.
improvement in:  There’s been no improvement in your father’s health.
increase in:  In the late 1940s there was a sharp increase in population.
influence on:  My grandfather had a big influence on my choice of career.
interest in:  She has no interest in astronomy.
origin of:  What is the origin of this word?
possibility of:  There’s absolutely no possibility of our arrival on time.
price of:  The price of gasoline has been increasing.
probability of:  There’s a 60% possibility of rain tomorrow.
quality of:  The quality of cars made in that country is quite high.
reason for:  There’s no good reason for forgetting your anniversary.
reliance on:  He’s developed a reliance on sleeping pills.
solution to:  I don’t see an easy solution to this problem.
supply of:  We have a good supply of ice for the party.
team of:  A team of doctors is on its way to the affected area.