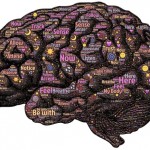 What researchers have discovered about left and right brain thinking is not as simple as most people believe.  There’s a general belief that right-brained people are creative and left-brained people are logical, but this is not 100% true.  When the brain is examined in relationship to language, which is both creative and logical, studies have shown that both hemispheres are active.  It’s basically true that the logical parts of language such as grammar, vocabulary and literal meaning are mostly processed in the left brain, and the creative parts of the language such as intonation, emphasis and figurative meaning are processed in the right brain.  However, this is only true for 95% of right-handed people and 81% of left-handed people.  For that 5% of right-handed and 19% of left-handed people, this isn’t true.  Therefore, when you hear or read about the differences between right and left brain activity, you should understand that it’s only a generality and that there are lots of people for whom it’s not true.  Understanding this, however, let’s look at a typical right-handed person’s brain to see where different types of thinking are happening.

In a typical right-handed person, the right hemisphere is used for understanding new experiences and the left is used for routines or things you’ve done many times before.  The right brain is where creativity and imagination take place.  It’s also the center for holistic thinking, intuition, feelings and daydreaming.  The left brain is where logical and analytic thinking take place.  It’s also the center for mathematics, detailed thinking, reading and writing.

We continue to learn more about the brain as time goes on, and many neuroscientists say that all this right-left brain information is outdated.  However, one thing remains true.  We need both parts of our brains to process the world around us.

researchers:  scientists who are looking for answers
creative:  making new thoughts
logical:  mechanical, truthful thinking
literal:  dictionary meaning
intonation:  the voice going high and low
emphasis:  strong words that are higher and louder
figurative:  what the words really mean, which is different from the dictionary meaning.
processed:  thought about and understood
activity:  action,  thinking
generality:  mostly true but not totally true
typical:  average, normal
hemisphere:  half of the brain
routines:  habits, things you do repeatedly
creativity:  the making of new thoughts
holistic:  the whole picture, not just part of it
intuition:  knowing something without any evidence
analytic:  breaking down a whole thing into its parts
take place:  happen
generally:  it’s mostly true that
concentrates:  looks more closely
details:  little things that seem unimportant
neuroscientists:  people who study the brain
outdated:  no longer true