The story of corn flakes 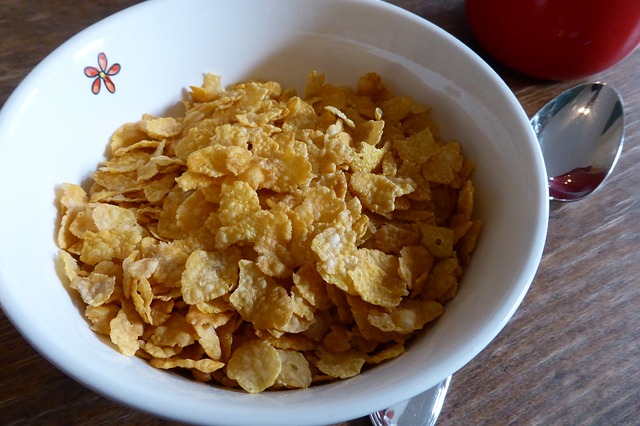 Corn flakes are a popular breakfast cereal for many North Americans.  There are many brands of this cereal now, but in the beginning it was the idea of a couple of brothers.  The inventors of this food were Drs. John and Will Kellogg, and the funny thing is they made this cereal by accident.  The story goes like this.  They were both Seventh-day Adventists, a strict religion, and were trying to make vegetarian food for people of their church, who believed that eating meat was wrong.  One day in August, 1884, as they were experimenting with food in their home, they were both called to an emergency at the seminary where they worked.  They had to leave in a hurry and left the corn cooking by mistake.  When they got back home, it had all dried out and become flaky.  Because they didn’t want to waste food, they thought of a way to eat it – with milk and a little sugar.  In fact, this cereal became very popular with the people at the seminary.  Will decided to manufacture the cereal and built a factory called Battle Creek Toasted Corn Flake Company.  He made the cereal sweet by adding sugar, and it became popular all over North America.  It’s interesting to note that the Kellogg company also developed Rice Krispies, another popular breakfast cereal, in 1928.

Vocabulary:
cereal:  grain, seed from grasses such as wheat, oats and corn
brands:  kinds made by different companies
inventors:  people who make something new
Drs.:  Doctors
funny thing:  unusual thing, odd thing
by accident:  unplanned
religion:  a system of beliefs
vegetarian:  made from only plants
experimenting:  trying different ways to see what works
emergency:  something that needs fast action
seminary:  religious school
flaky:  in small, dry, flat pieces
waste:  not use, throw out
popular:  liked by many people
manufacture:  make in a factory in large quantities
factory:  a large building where workers and/or machines make things
to note:  to also know