The story of money 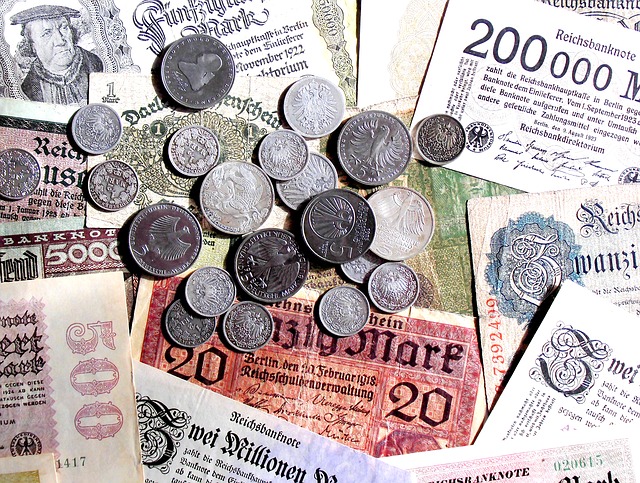 Before there was money, people bartered for things. In other words, they traded one thing for another thing, such as chickens for a pig.  Then in 1200 BCE people in China and India started using cowrie shells, which were small, shiny and colorful.  These beautiful shells came from the shallow waters around the Indian and Pacific Oceans.  Meanwhile, in the Americas wampum, a string of beads made from small white shells, was used as money.

A couple centuries later the first metal money, made of bronze or copper, was made in China and looked like the cowrie shells that people were already using as money.  The Qin Dynasty brought the round coins with square holes in the middle to all of China, and these coins continued to be used for the next 2000 years.  In Europe in around 600 BCE, coins were made from silver and gold.  This kind of money was first made in Lydia, present-day western Turkey, and from there it quickly spread to the Greeks, Persians, Macedonians, and then the Romans.

The first paper money in the world was made in China during the Song Dynasty.  It didn’t replace the older money but was used with it.  Europeans were only using coins up to the year 1600, made from the gold and silver they got from the Americas.  The first banknotes were issued in Sweden by Stockholms Banco in 1661, and many other European banks started using them too.  However, the system was imperfect because the value of all the different banknotes was not standard.  Then in 1816 England made gold the standard of value, and English paper banknotes could be exchanged for this precious metal.  The first paper money in North America, which was really IOUs, was issued by colonial governments to make trade between America and Europe easier since it was such a long journey, and people had to wait for their money for months.  By the start of the 20th century almost all countries had a gold standard backing their legal tender notes.  Because the United States won World War II, her currency, the dollar, was adopted by many other countries as the standard for their currencies.  Each currency was worth a fixed amount in US dollars.  For example, the French franc was worth 20 cents US.  This continued until 1971 when the US government stopped backing the US dollar with gold.  After this many countries stopped making the US dollar their standard.  Most of the world’s currencies became unbacked by anything except their ability to buy things.  For this reason, and the laws of government, money still had value.  The next time you reach for any money, you may look at it a little differently now that you know it’s history.

BCE:  Before Common Era (before the year 1)
shell:  the hard exterior of an animal
century:  hundred years
bronze:  a combination of copper and tin
coins:  small round metal money
banknotes:  paper from a bank that promises payment
imperfect:  not perfect
standard:  equal for everybody
precious:  expensive
IOU:  I owe you, a promise on paper to pay someone later
issued:  given to the people
colonial:  controlled by a European country
trade:  the buying and selling of goods between countries
journey:  trip
backing:  supporting
legal tender notes:  paper money supported by government
currency:  paper and coin money
adopted:  accepted and used
fixed:  exact and unchanging

Click on the audio recording below to hear the vocabulary pronunciation.