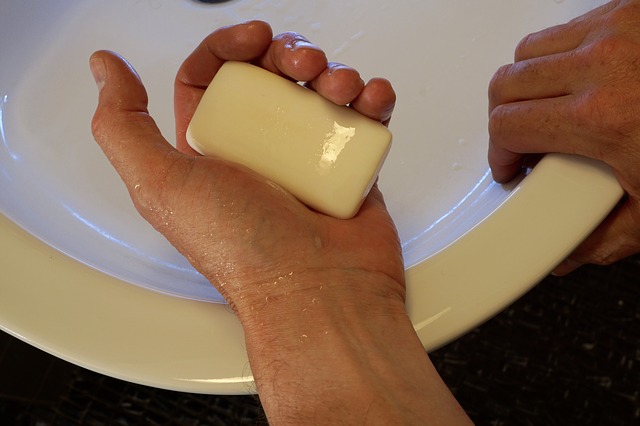 The first mention of soap dates from about 2800 BCE in ancient Babylon.  It was made by mixing oil from the cassia tree and ashes from a fire and boiling the two together in water.  A white foam would form at the top of the pot, and this would harden into soap when cooled.  In other parts of the world, people started making soap with other plant oils, but the method was the same.  In ancient Rome animal fat rather than plant oil was used.  The process of making soap was expensive, however,  so it was only used by the rich.  In the 8th century when production increased, soap became common in Italy, France and Spain, but people in the rest of Europe rarely used it until the 17th century.  Even in 1672 when an Italian gentleman sent a bar of soap to his German lady friend, he had to include instructions on how to use it.  In the late 18th century,  the use of soap increased because of the industrialized production of bar soap and because people understood that using soap made them healthier because it washed away microorganisms.  Around 1790 Nicolas Leblanc, a French chemist, figured out how to get sodium hydroxide (commonly known as lye) from salt, and used this in place of wood ash to make soap.  Today soap is used by people all over the world.  It is made from palm oil, coconut oil, olive oil or laurel oil.  If combined with sodium hydroxide, a harder soap results, and if combined with potassium hydroxide, a softer soap results.

mention of:  writing about
BCE:  Before Common Era (used to be BC)
ancient:  very very old
cassia tree:  a tree native to south China and southern and eastern Asia which produces cinnamon
ashes:  the powder that remains after burning
boiling:  raising the temperature so that bubbles form
foam:  many tiny bubbles
harden:  become hard
method:  the way to do something
process:  the way to make something
the rich:  rich people
production:  the making (of something)
rarely:  almost never
industrialized:  made in large quantities by factories
microorganisms:  tiny tiny animals that live on your skin
figured out:  solved the problem of
sodium hydroxide:  NaOH
potassium hydroxide:  KOH