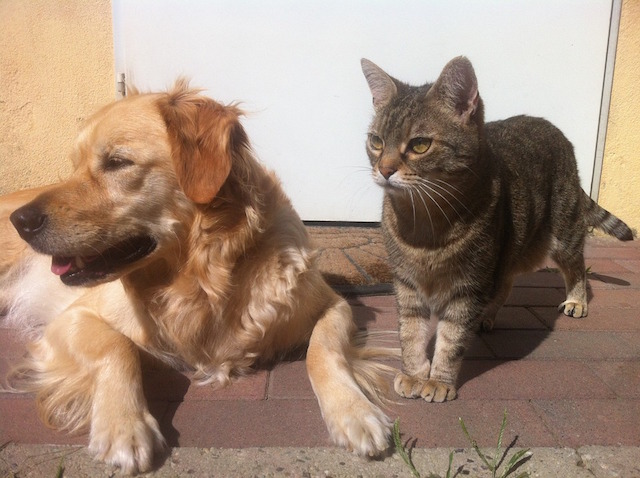 In English we use a lot of expressions with animals because we think certain characteristics go with certain animals.  Here is a list of the most common of these expressions.

A copy cat (n.):  someone who does the same thing as someone else
That was my idea.  You’re just a copy cat.

A fraidy-cat (n.):  someone who is easily frightened
My little sister is a fraidy-cat.

Cat nap (n.):  a short sleep
I had a cat nap this afternoon, so I should be okay for this evening.

In the dog house (prep. phrase):  in a lot of trouble with another person
I forgot our anniversary, and now I’m in the dog house.

Top dog (n.):  most important person in an organization
My brother is top dog in his sales department.

Chicken out (v.):  to be too afraid to do something
He was going to ask her to the school dance, but he chickened out.

Swan song (n.):  a final act or performance before dying or retirement
She’s an almost 35-year-old ballerina, so this performance may be her swan song.

Watch something like a hawk:  to watch intensely and for a long time
You’d better watch him like a hawk, or he’ll make a mistake we can’t fix.

A dark horse (n.):  a person unknown to the general public
John Stewart is a dark horse in the next election, but he could win.

Get off one’s high horse:  not think one is better than other people
I know she hurt you, but get off your high horse.  You’re not perfect either.

Horse around (v.):  play in a rough way
When we’re gone tonight I don’t want you and your brother to horse around.

Rat on someone (v.):  report someone’s bad behavior to someone in authority
He ratted on his friend, and the police came and arrested him.

Smell a rat:  feel that someone or something is not truthful
I smell a rat.  I think someone on the committee is trying to make it difficult for the president.

A road hog (n.):  a driver who uses more than his share of the road
Go around that road hog, or we’re going to be late.

A lone wolf (n.):  a person who prefers to be alone
My brother is kind of a lone wolf.  He has come home only a couple times in the last ten years.

Cry wolf (v.):  give a false alarm
She cried wolf too many times, and no one came to save her this time.

A cash cow (n.):  a business that makes a lot of money
That gold mine in the Yukon is a cash cow.

A sacred cow (n.):  something highly regarded and not open to criticism
Government pensions used to be a sacred cow, but now the public is demanding change.

A busy bee (n.):  someone who is busy all the time
She’s such a busy bee she doesn’t have time to go for coffee.

Ants in one’s pants (n.):  very restless or excited about something
Before an exam I always get ants in my pants.

A kettle of fish (n.):  an awkward, difficult or bad situation
After the chairperson quit, it left the rest of us in a kettle of fish.

A red herring (n.):  something that misleads and takes attention away from the important issue
I think the missing money is just a red herring.  There’s a bigger problem here.

A paper tiger (n.):  someone who appears to have power but who does not
Don’t pay much attention to my grandfather.  He’s a paper tiger.

An eager beaver (n.):  someone who is excited about doing something
You’re lucky as a teacher.  It seems like you have a classroom of eager beavers.

Get the lion’s share (v.):  get more than one’s fair share
Because he’s the oldest, my brother gets the lions share of attention from our parents.

Guinea pig (n.):  a person who is tested to see if something works
I don’t want to be your guinea pig, so no, I don’t want you to give me a haircut.

Monkey business (n.):  mischief, unethical behavior
We’ll be back home at 11:00, and I don’t want any monkey business while we’re gone.