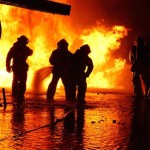 brave:  doing something even though you’re afraid
The brave fireman ran into the burning building and carried the baby to safety.
His mother told him to be a brave boy in the dentist’s chair.

cute:  pretty in a pleasing way
There were three cute kittens on the bed.
Most people remember the actor when he was a cute little kid.

crazy:  wild, uncontrolled, senseless, not at all normal
John was acting like a crazy person at the party.
It was crazy to go swimming in the lake in winter.

dependable:  able to be trusted to do what is necessary
Although his car is old, it’s still very dependable.
She has been his dependable secretary for many years.

faithful:  always supportive, loyal
He is one of her oldest and most faithful friends.
She remained faithful to her husband during his long illness.

horrible:  terrible, awful
He’ll never forget the skunk’s horrible smell.
There was a horrible five-car accident on the highway.

official:  recognized as true by authorities, legal
Canada has two official languages – English and French.
This is an official copy of their marriage certificate.

proud:  having a good feeling for a good result
His father was proud of him for telling the truth.
She was proud of herself for scoring the winning goal.

steep:  at a high angle
The driveway up to his house was very steep.
She likes to ski on steep slopes to test her abilities.

sudden:  fast, without warning
Their picnic was ruined by a sudden rainstorm.
A sudden outbreak of the flu kept many children home from school.