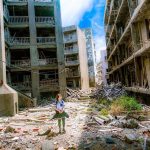 abandon:  to leave and never go back
The family abandoned the farm and moved to the city.
When it started to sink, everyone abandoned the ship.

back:  to support with help or money
Most of the students backed Gina for class president.
His father backed him in his new business.

celebrate:  to have fun because of a good result or special event
We’re celebrating his birthday this Friday after work.
After he got the job, he and his wife went out to celebrate.

cope:  to be okay in a new situation
He couldn’t cope with the changes in his job, so he quit.
How did you cope with the death of your father?

deteriorate:  to get worse in quality, decay
Her grandmother’s health started to deteriorate after she fell in the shower.
Plastic does not deteriorate as fast as wood.

enable:  to make it possible to do something
Cell phones enable people to keep in touch more easily.
Her knowledge of German enabled her to understand the conversation.

found:  to establish something new
Doctors Without Borders (Medecins Sans Frontieres) was founded in 1971.
The group finally succeeded in founding a non-profit organization to feed the poor.

insist:  to be firm about a demand
If you insist, I will refund your money.
He insisted that his wife have dinner on the table at 6:00 every day.

mumble:  to say something unclearly in a low voice
After she left, he mumbled something that I couldn’t understand.
Stop mumbling and tell me what you want.

penalize:  to punish, give a penalty to
The team was penalized for delaying the game.
Students who miss the deadline will be penalized.

puncture:  to make a hole in
The sharp rocks punctured his tire.
Try not to puncture any of the balloons.

rot:  to spoil, decay
The apples have started to rot.
Sugar will rot your teeth if you don’t brush.

swap:  to give something in exchange for something else
At school the children like to swap sandwiches.
He swapped his old cell phone for a pair of running shoes.

whistle:  to make a high sound using your lips and tongue
If you need me, whistle and I’ll come immediately.
He whistles while he works around the house.